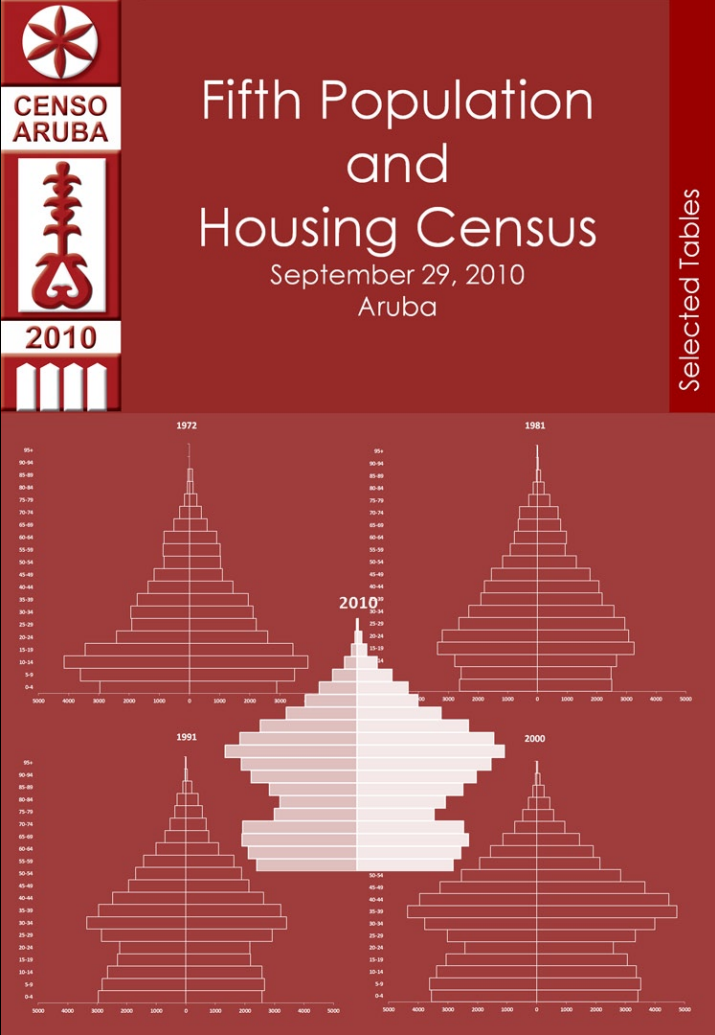 Publication based on census data (overview)

Volunteering in Aruba 2010: This paper presents the characteristics of volunteers in Aruba, according to data collected during the 2010 Census. In addition, data is presented on the frequency of volunteering and on the type of organizations where volunteers are active. [ Download  Volunteers ]

ICT in Aruba 2010: In this paper, data is presented on the presence of computers, mobile phones, and internet connections in households in Aruba in 2010. [Download ICT in Aruba (2010)]

Population projections 2010-2030: In this paper, three scenarios are presented to explore the future size and composition of the population of Aruba. The projections show important tends that will determine the demographic landscape of Aruba in the next twenty years. A model is used which is based on the relationship between the yearly growth of the economy and the requirements of the labor market. [Download Population projections 2010-2030 : revision in 2014]

Gender gap in Aruba (English): The World Economic Forum introduced The Global Gender Gap Index in 2006, which is a framework for capturing the magnitude of gender-based disparities and tracking their progress. The Central Bureau of Statistics also focused on this international topic through data collected by means of the Fifth Population and Housing Census held in October 2010. The term “gender” refers to both women and men and their status, relative to each other. Gender equality refers to that stage of human social development at which the rights, responsibilities and opportunities of individuals are not be determined by the fact of being born male or female. The Global Gender Gap Index examines the gap between men and women in four fundamental categories: economic participation and opportunity, educational attainment, health and survival and political empowerment. Papiamento version also available…[Download Gender Gap in Aruba]

Ageing on Aruba, Challenges for a sustainable society: This article describes the ageing process of Aruba’s population and the consequences of this process. [Download Special issue on Aruba’s ageing population, 1960 – 2023 and Aa Ageing in Aruba, 2010]

Life expectancy: In this research different life tables were constructed, using data from the Population Census 2010 and other sources such as the Population Registry and Department of Public Health of Aruba. A life table is made to measure mortality, survivorship and life expectancy of a population by age and sex and is used by a variety of specialists in a large numbers of ways. Life expetancy trends are analyzed back till 1972, and international comparisons are also made. [Download Aa. Census 2010 – Life expectancy]